Dragging myself out of bed, I groan and yell, “Coming!” Why do I yell? She can’t hear me, she’s deaf! This will be the fourth trip I’ve made to her room since 10 PM and I’m exhausted. I shouldn’t have made my bed so comfy because it makes it even harder to leave it.

Glancing to the window, I see a brilliant red spot in the sky, visible within the gap between my blinds and the window frame. What the …? I lower the blinds a little to see more of the sky. The red glow is huge and I think it must be a helicopter. No, it’s not moving. The orange light shimmers like a star and there are lines of clear light emanating outward, reminding me of how the Christmas star looks in movies.

I dash to her room, disentangle her legs from the bed sheets, fluff her pillow, get her a drink of water, and kiss her forehead as she murmurs “Thank you” and then drifts to sleep.  When I return to my bedroom, the orange light is still there.

It must be a planet, I think. It’s orange, so could be Mars, but I’ve never seen Mars that bright! Jupiter? Then I remember the astronomy app on my phone. After the app loads, I point my phone to the sky and the program centers on that glowing orange star.

Mars in her most glorious brilliance as she moves closer to the Earth. The app reports that Mars is making it’s closest approach to Earth in fifteen years and the viewing will be excellent. In fact, Mars will move even closer later in the month.

I stand in the darkness of my room and stare at gleaming, golden-orange Mars and smile. It is so beautiful. If Rhia hadn’t dragged me out of bed again I would have missed it. Not that I’m thrilled to lose more sleep, but I’m grateful she woke me up at this particular moment. Leaving the blind lowered, I crawl back into bed where I discover I can still see Mars from my pillow. I drift back to sleep with that beautiful image filling my dreams.

January 31st. I am standing on my deck at 1 AM staring at the clear, full moon that looks as if it is balancing on the tip of my neighbor’s  giant redwood tree. No wind, no cars, nothing but silence and bright, white light turning the dark sky indigo. I can’t sleep. The moon has called me. 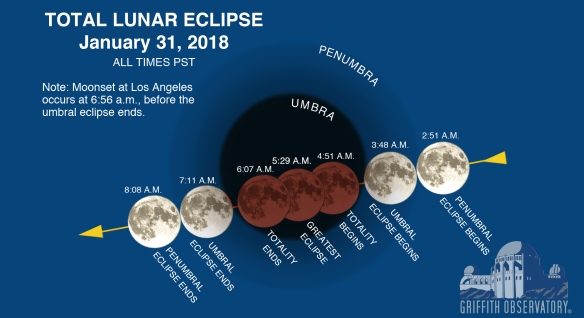 I went to bed before the moon turned red and the eclipse began, but I saw thousands of images of that glorious moon when I woke up. The whole world was fascinated with the incredible coincidence of a blue moon turning into a red moon while an eclipse happened. What could it mean? What sort of magic could it be? Or warning?

Tibetan Buddhists believe anything you do during an eclipse, good or bad, will be magnified ten-fold. Many Native American tribes believe that the moon controls and regulates the planet, so a lunar eclipse is a sign of a transformation on Earth. Traditional Hinduism believes a lunar or solar eclipse is bad luck because good things only happen when there is light. Temples are closed and people are advised not to eat anything for 9 hours leading up to an eclipse. Many Muslims say a special prayer for Allah’s blessing because an eclipse is a reminder of his power. Many tribes in Africa believe an eclipse is a good time to come together and end old feuds while the sun and the moon are busy fighting. Whether you pray, or leave your crystals out in the moonlight to recharge them, a lunar eclipse and a full, blood moon, are powerful symbols.

For me, the eclipse of a blue/blood moon is a reminder of the beauty of the universe that we are a part of it. Our planet is one piece of a vast solar system. We are circling a star with our companion the moon, joined by other planets, all connected with gravity. You and I and everything else on this planet is a part of that. And we are the lucky creatures who can stare out at the moon on a cloudless night and wonder. If other creatures are also struck by the beauty of it all, they don’t tell us their stories. But we humans create stories and draw pictures and share photos on the internet in a collective “wow!”

Perhaps that understanding is what makes people go crazy during a full moon. Ask any nurse, the ER’s are full and the patients are restless. Bartenders report more fights and Police Officers respond to more calls. Do some people see the moon as a reminder of how insignificant we are? If we are tiny and alone in the universe then nothing matters. Might as well get drunk and punch a stranger.

And maybe all this obsession over the moon is “boring”, as Neil DeGrasse Tyson says.

“Blue” moons (the second full moon in a calendar month) occur, on average, every two and a half to three years. An event more frequent than the Summer Olympics. But nobody ever declares “Watch out for a rare Olympics coming up!”

Okay, so a blue moon with a blood moon and an eclipse are nothing to get too excited about. But this non-physics professor still gets excited when looking up at the stars. I love the idea that we are a tiny part of a vast universe. I don’t feel insignificant. I feel alive!

It’s 2:00 PM and I’m sitting in a bar in Ukiah, California listening to the Fire Bombers roar overhead. Ten miles away, a fire burns out of control, destroying homes and families. Like so many in my neighborhood right now, I’m hiding in my local watering hole with a glass of wine in my hand watching the news on the TV’s. So far, none of the news reports mention Mendocino County. We are too far beyond the San Francisco Bay Area and we all feel forgotten.

South of us, in Sonoma County, fires rage as well. Northern Santa Rosa, a city of 170,000 people, has burned. Entire neighborhoods have been flattened and thousands of people evacuated. Devastation in the Wine Country, the news reporters say. It is frightening and sad and I am sick with fear for all those people. But I understand why my neighbors in this bar are tired of hearing all the news south of us.

Mendocino County is on fire too. Why hasn’t anyone mentioned that?

On the other end of the bar, a man is slowly getting drunk while waiting to hear if his house burned down. A woman is collecting donations to feed horses evacuated to the fairgrounds. A teacher is crying because several of her students are now homeless. Everyone is hungry for information. Which roads are closed? Is Ukiah in danger? Has anyone heard from Andy? Or Lucinda. Is her family okay? A dog was found badly burned but alive; anyone looking for a black lab?

The bartender fills pint glasses and mixes drinks. She asks if I want another glass of wine. I shake my head. It’s time to go to the market and get supplies, just in case Hwy 101 closes and there are shortages. Everyone is surprised the power is still on. We all wonder for how much longer.

For now, Ukiah is safe. The town is filling with evacuees from Redwood Valley and Potter Valley. There are firetrucks and personnel everywhere and I know they will do whatever it takes to protect our vital airport. Ash falls and smoke burns our eyes, but the fires are burning away from us. We are safe. We are safe… I say this every night as I tuck my daughter into bed at night.