When I heard the news, I cried.

After a year of peaceful protest, millions of supporters, veterans providing protection, celebrities raising awarenes, and Native Tribes from all over the world joining together to fight for clean water, the oil company won. The North Dakota Access Pipeline is being built as I write this and there isn’t a damn thing we can do about it.

When I saw the police rolling in on miliatary style troop carriers to surround the Oceti Sakowin camp, complete with riot gear and assault rifles, I cried. How many times in our history have Native People faced this exact situation?

Image from Voice of America

All the People wanted was clean water. That’s it. They didn’t want to annex the land back to the reservation or build a casino or anything more than a guarantee that they and their grandchildren would have clean water to drink. Clean water. One of the basic requirements of survival.

And now there’s no guarantee they’ll have clean water next year.

I feel powerless, angry and sad. I sent money to help the Water Protectors buy supplies for winter and then more money to hire lawyers. Thousands of people did the same. But none of us have enough power or wealth to fight oil companies and protect clean water.

Then I saw this: https://twitter.com/the_orangeidiot/status/834590610644402177  This the final message from Raymond Kingfisher, leader of the Cheyenne People and of Oceti Sacowin Camp. With tears in his eyes and a voice filled with emotion, he led the final prayers and thanked everyone for their support. He also promised that the fight wasn’t over.

This powerful video recorded on the last day of the protest shook me. If these people can walk away peacefully and proclaim the battle isn’t over, then so can I. If they can face that stark grief but still have hope, then so can I.

I will fight for people with disabilities, for equality, for compassion, for freedom of the press and of speech. I will fight for healthcare and education. And yes, for clean water. 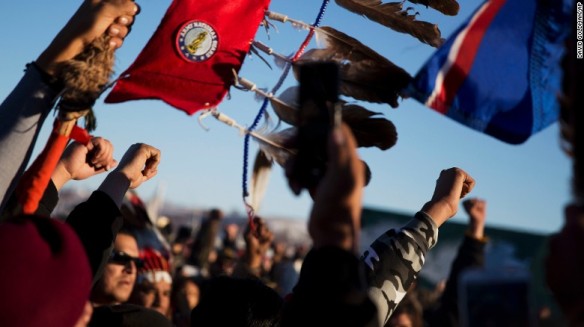 I will fight for the welfare of future generations, just as the tribes at Standing Rock did.

Here is another powerful report from the last days of  Oceti Sacowin Camp from Intercept, by Jihan Hafiz: https://theintercept.com/2017/02/25/video-a-closing-prayer-for-standing-rocks-oceti-sakowin/

And here is how you can help the battle:https://medium.com/@ShaunKing/please-support-these-5-standing-rock-legal-defense-funds-to-stop-the-dakota-access-pipeline-754be4674ec2#.b6nzwtxnh  (thank you Shaun King for putting this list together)